Getting my monk on

I'm currently finishing up a 17 track song cycle called The Book of Ours. It's all based on medieval illuminated manuscripts. Years ago the wealthy used to commission these posh books and songs about themselves and how holy they were. Some were known as the Book of Hours. 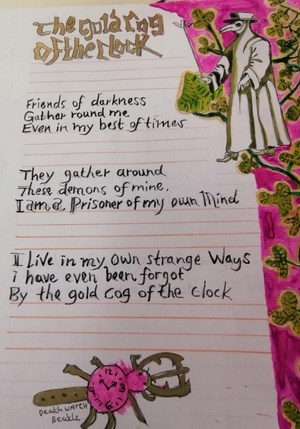 This one is a book of 'ours', a book about the lives of homeless people, written by the people who have lived it. My songs are part of this bigger project which will centre around a beautiful handmade book rich in poems, drawings, calligraphy and illustrated by the people we've worked with. This page is an example of one of the song lyrics. It's another project by arthur+martha

The songs are all co-writes and feature the voices of people we met and worked with. Work began well before lockdown so it's been a huge undertaking. My brief was to bring a medieval flavour to the music. I've got no formal musical training at all so I've had to research. I think we've achieved it through using certain scales, drum patterns and harmonies.

It's a non-religious work but the song cycle will consist of Hymns, Prayers and Antiphons (which are repetitive chants). The songs go through a cycle of seven stages - Matins, Laud, Prime, Terse, Sext, None, Vespers, Compline - these represent times of the monastic day.

Once it's done, the songs will form part of how the work is exhibited, when it goes into galleries and museums.
Read more at https://arthur-martha.com/category/a-book-of-ours/